Palm oil is a resource for production of renewable fuel with the potential to become 100% neutral carbon. Unlike fossil fuels, the combustion of biofuel made from palm oil does not raise the level of carbon dioxide in the atmosphere. This is because there is a positive balance between what is emitted with the use of this fuel and the carbon dioxide captured in the photosynthesis process, without mentioning the release of oxygen to the atmosphere, which is much bigger than in cultures like canola, for instance. 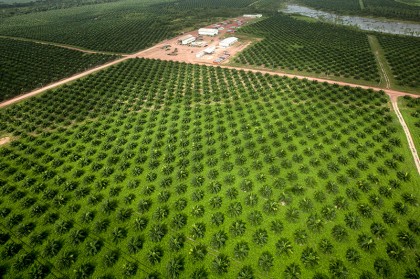 From the Zoning of Palm in Brazil, new plantations will only be able to occur in degraded areas, whose rehabilitation favors the significate abduction of carbon during photosynthesis to form its biomass.

The production of palm oil can contribute to accelerate or reduce the rhythm of climate changes, depending on how the agricultural and industrial operations are planned, implanted and performed.

While plantations of palm can abduct from 6 to 10 tons of CO2e per year, the change of use of land to the establishment of seedlings and the treatment of industrial effluents are the main sources of emission of greenhouse gases and can overcome the carbon abducted by the plantations. The combustion of fossil fuels and the application of fertilizers also contribute to raise the emission of greenhouse gases.

So that the production of palm oil contributes to alleviate the climate changes, the first attitude to be taken by companies is the establishment of new plantations only in areas previously deforested in the past and that possess a high content of carbon in the remaining vegetation. The establishment of systems of treatment of effluents that do not generate methane and the rationalization of the use of fertilizers and fuels must also be considered in the strategies of reduction of emissions.